I'm trying out new things today. I moved the iMac to the middle of my desk and am finally forcing myself to switch from my old buggy Windows 7 64-bit box to a less old Dell box running Windows 8 and Office 2013. My clients know that I have really strict policies about replacing old equipment proactively, but as they say, the cobbler's children have no shoes. (Actually, the cobbler's children do have shoes,  they're just previously worn and resoled.)

As a techie, it's fun to play with new toys, but don't try this at home kids … or rather, do try this at home, just not in the office. As a general rule of thumb for business, I strongly suggest holding off on the latest and greatest unless there's a really strong need. Even then, it's a great idea to wait until the first major set of fixes (i.e. service pack) is released. At some point, the changes will be inevitable, but that usually takes at least a couple of years. New software can be taxing on old hardware and compatibility issues take time to work out. Part of my job is to be the guinea pig, so I'll share a few of my initial impressions and follow-up to see how things progress over the coming weeks. 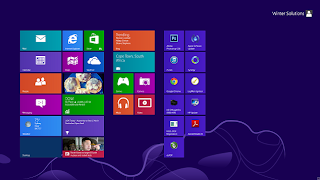 The Windows 8 Start Screen … [scratching my head] … It might look great on a smartphone, but do I really want this on my computer? Alec, one of my computer repair technicians, thinks it's "awesome" on his 15.5" touch-screen portable computer. I'm not sure if I'm getting too old for awesome or just don't want to be treated like I don't know how to use a computer. (That's what my Mac's for.) My brother Bryan, who's only a few years younger, has gotten used to it and says he's starting to like it, but I couldn't run fast enough to install Classic Shell, a free 3rd party application that puts back the Start menu and Windows Explorer I'm used to. It reminds me of the switch from Office 2003 to Office 2007, when the ribbon was introduced. At first, most people hated it  and I installed an alternate menu for people, but over time people got used to it, it was certainly easier for users new to Office, and finally the ribbon improved significantly with Office 2010. It seems like Microsoft gets things right every other time. Windows 98 was great. Windows ME, not so much. Windows XP was great. Windows Vista was avoided like the plague. Windows 7 is solid. Windows 8, we'll see. 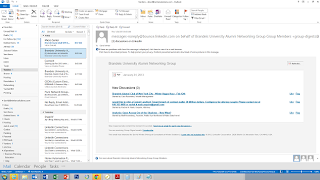 Microsoft Office 2013 – For most serious business users, Outlook is a major part of your day, so I'm starting there. It connected to the Winter Solutions Exchange servers with no problem, but again, I'm really wary about the new look and feel. For the most part, things are where I expect them to be, but the modern clean look means that there's less contrast and things can be subtly more difficult to find. In web design, I welcomed the move away from the pastel websites reminiscent of 80's Miami Vice, and as I type this on my iMac, it's clear to be that the bold use of color does a lot to improve usability for both MacOS and Windows 7 users. It's disappointing to see Microsoft moving away from this. Rather than the familiar yellowish color, Outlook carries a dark blue theme that's easily confused with Word. I did a scan of Microsoft's What's New. Having the weather at the top of Outlook Calendar is nice, but not enough to make me switch. I think it will take time for me to really see the benefits.

So is there any reason to actually upgrade? New look and feel is easy to sell, but its not as easy to push all of of the stuff that happens under the hood. It will take time to really get a sense of that piece. Whereas past upgrades have been focused on embracing the Internet, new software releases are tasked with embracing social networking and the cloud. While the Chromebook and tablets such as the iPad are certainly works in progress, they certainly open the discussion about what computers and software will look like in the next few years and the role of the desktop operating system and office suite may be a diminishing one. To answer my own question above,  I don't know yet. For now, I'll stick with my usual advice. Proactively upgrade your computer every 3-4 years and don't upgrade your operating system until you get a new computer. Even still, I'd hold off on buying a new business computer with Windows 8 until the first service pack is released and you're sure it's compatible with your business applications and the devices you use. If you're running Office 2007 or older, it's certainly worthwhile to go to Office 2013, but I don't see any reason as yet for Office 2010 users to rush. While Apple and Google are certainly dominating the consumer and handheld marketplace in many ways, and I think that Microsoft is legitimately afraid. The reality is that they still have a strong hold on both corporate and small business computing. Innovation breeds competition, and even though it's sometimes hard to see it in the short run, I I'm confident that even the kludgy Windows 8 and Office 2013 upgrades will contribute to a exciting progress in the months and years to come. 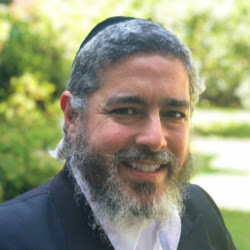 Dovid Winter is Principal Consultant of Winter Solutions and has been providing hands-on IT management services to small-business, non-profit and education since 1986. In addition to website development and hosting services, Winter Solutions' offers an array of managed IT services. Whether you are looking for assistance with a single project or to outsource your entire IT department, Winter Solutions has a solution to meet your needs. Contact us at 781 821-0000.
Posted by Unknown at 6:36 AM